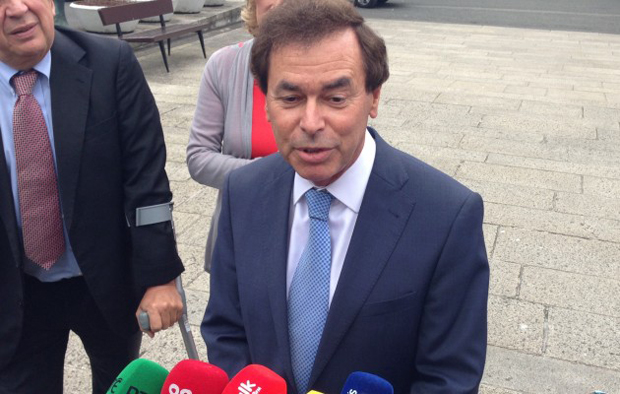 FORMER minister for Justice Alan Shatter suggested to members of the Jack and Jill foundation that a name change could be warranted after he donated his severance package to the charity yesterday afternoon.

Mr. Shatter, who generously donated 70,000 euros, hoped the board would consider including his own name, Alan, into the title, as a courtesy to himself.

“They do it in America all the time for people who donate large sums of money.” he explained to Jonathan Irwin, CEO and Founder of the Jack & Jill Children’s Foundation. “It kind of has a nice ring to it I think and people would probably donate a lot more money if my name was involved.”

During the week, speculation was mounting whether the disgraced politician would actually take the package in the first place due to local elections taking place.

In a brief press conference outside Leinster House yesterday, Mr. Shatter teased awaiting journalists, stating he will be taking the severance payment after all. The TD then paused for a moment in a bid to build up some kind of tension, before announcing that he was going to give the said payment to charity all along.

“He had us all going on the pause.” said one journalist, who was later treated in hospital for palpitations. “He really knows how to create a moment. Such poise in the face of adversity.”

However, it is understood the Jack And Jill Foundation have no plans to add Mr. Shatters first name to their charity title, but will keep his name on file if the opportunity to do so ever arises in the future.