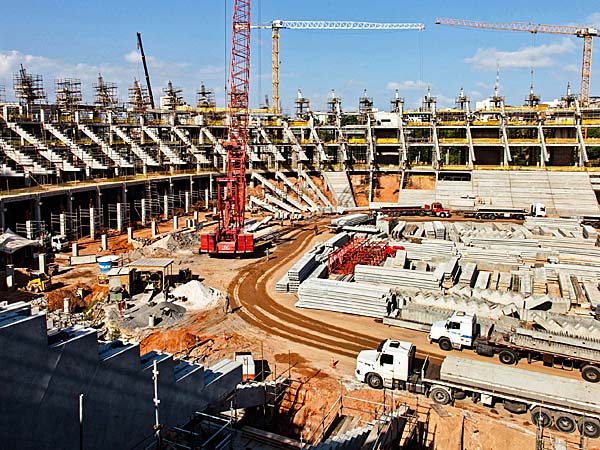 Organisers have sought to reassure fans that vital infrastructure and services will be in place in time for the World Cup tournament kick off on the 12th of June.

There has been growing unrest amongst locals, citing the huge cost of hosting the tournament as well as a lack of investment in essential services such as health and education.

Those Brazilians who continue to protest and vocalise their unrest have been informed today that at least one aspect of the tournament’s preparation is going according to plan.

“We can officially confirm that the construction of sex workers has been completed ahead of time for the World Cup,” a beaming José Nascimento proclaimed at a briefing with the media.

“We have had our doubters and we may be embarrassingly short on delivering on our promises, but Brazil will put on a world class prostitution service that is up there with previous tournaments.”

The purpose built units have been manufactured in various low income, poverty-laden areas of Brazil and their completion has seen a much needed boost to the economy.

It has long been expected that travelling fans, players and media would avail of the sexual services of women ferried into cities in time for the World Cup but before today’s announcement there was a fear there would be a shortage in supply.

“There are special plans in place for certain scenarios namely Benzema and Ribery, we feel we can cope with the demand,” added Nascimento.

An estimated 600,000 football fans are to descend on Brazil for the World Cup with many expected to pay for sex with prostitutes, with some being underage.

“While the World Cup will shine a light on problems here in Brazil such as our shortage in prostitutes we hope that once the tournament is over, less attention will be paid to the problem,” concluded Nascimento.