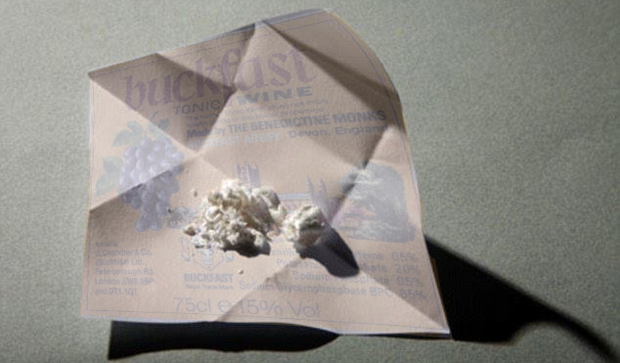 BUCKFAST is to be sold in a powdered form and will be available in “wrap deals” for the first time, the firm behind the controversial tonic wine has announced today.

The alcoholic drink, which is brewed by satanic worshippers in Devon, is quite popular with young people in Scotland and Ireland due to it’s “speedy like” effect on the brain.

“We calls it liquid speed boy!” said Waterford lad Jamie Lonergan, who admits to regularly searching for shops that sell it on Sunday mornings after a session. “It only makes sense for them to make a powder out of it. Some stuff to get you going.”

The firm said it will start selling the one gram wraps of the powder for €10.50 in the summer, just in time for festival season. Each wrap is said to be the equivalent of one 700ml bottle and can be ingested orally in the mouth or snorted with a straw or banknote.

The concoction, which can be mixed with other powders for increased effect, is due to go on sale here in Ireland from June, in all good council estate shops.