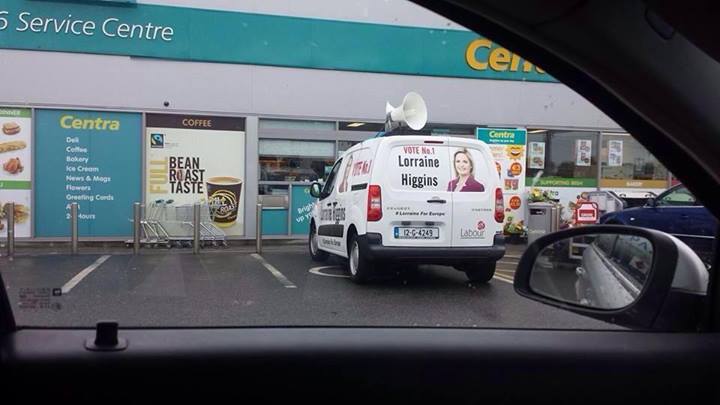 EUROPEAN Election candidate Lorraine Higgins, who found herself in hot water online yesterday when a photo of her canvassing van parked in a disabled parking space went viral, has today stood by her driver claiming that being a Labour candidate counts as a disability.

The photo, taken by a passer-by outside a Centra, had raised the ire of thousands of online crusaders and keyboard warriors who called for Higgins to explain why a member of her staff hadn’t used any of the available regular parking.

The senator, who is running in the Midlands-North West constituency, cited Labours current disastrous standing in opinion polls as well as their inability to implement or stand by any of their General Election promises as a sufficient handicap to warrant parking in a space designated for those with disabilities.

“We’re facing an utterly dreadful result in the upcoming election” said Higgins, supping a cup of Centra Full Bean Roast coffee and tucking into a cronut.

“The last opinion poll has us at around 8% of the vote, and there doesn’t seem to be anything we can do about it. We’re trying our best to win back public support but our failure to stand by our last election mandate keeps crippling our attempts.

“We’re taking the brunt of the bad decisions being made by an unpopular coalition. We’re political paraplegics. I think that’s justification enough to park wherever we want when popping into the shops for a jambon”.