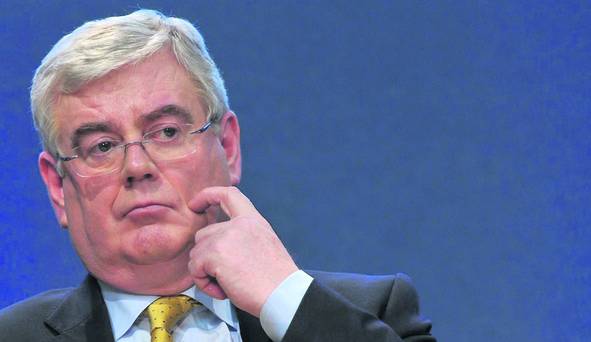 LABOUR party members have called for the leader of their own party, Eamon Gilmore, to resign today, because his stupid face is just becoming increasingly unbearable to look at.

MEP Phil Prendergast, who is behind the move, told WWN that she cannot bare to look at Mr. Gilmore’s ‘pudgy head’ any longer, and urged fellow party members to unite with her in his removal.

“Just look at it.” she said. “He’s like Podge and Rodge’s illegitimate father. Has he no shame?”

Several other Labour politicians also joined in on the action, stating that action is needed ahead of local and European elections next month if the party is to save some seats.

“He has one of those faces you’d love to scrunch up with one hand and then punch with the other.” said Brendan Howlin TD, who wished to remain anonymous. “He has a head like a burst boot and I don’t think he can carry us into the next election looking the way he does.”

Another Labour party member described the Tanaiste’s head as “a muttonhead” and figured Mr. Gilmore “ran into the back of a bus” in his younger days.

“It’s so squidgy and it wobbles when he walks.” he explained. “You can’t have the leader of the Labour party with a head like a smacked arse. It’s unfair to the people he’s leading.”

The Labour party is currently lagging significantly behind the majority of the other national parties, polling at just 6% of first preference votes nationwide.