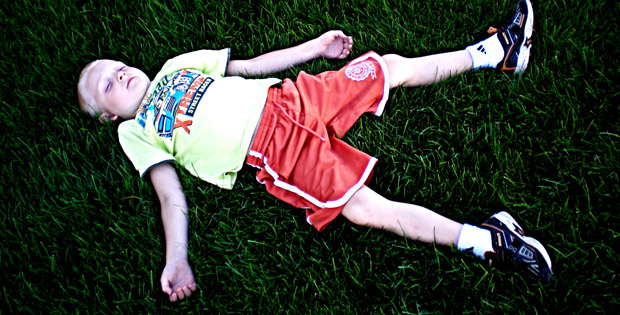 A COUNTY Waterford toddler is being treated for exhaustion in Ardkeen hospital today after spending the last 48 hours searching for Easter eggs in his grandparents’ garden.

Jake Kennedy (3) began last Easter Sunday morning by waking his granddad, John, at 7am, to ask him where are all his Easter eggs were.

Unaware of tradition, Jake was handed a badly scribbled map by his grandfather, and was told to “fuck out to the garden” for himself and look for them.

“I’ve no patience at that hour,” explained the 78-year-old to Gardaí. “He was still out there searching when myself and the wife got up at eleven.”

Following several hours of searching, grandmother, Helen Kennedy pleaded with her husband to just give him the eggs, but was refused point blank by the stubborn man.

“He said that Jake was old enough now to do things for himself and that myself and his mother spoil him too much,” she said. “When it went into the second day of the hunt I just had to do something.”

Mrs. Kennedy phoned Gardaí yesterday afternoon, in a bid to negotiate with her spouse. However, Gardaí didn’t attend to the scene until 11am this morning, where they found the disorientated child wandering around the premises.

The parents of the child, who were on holidays at the time, were contacted immediately by Gardaí. Little Jake was then taken to hospital, where he believed to be in a stable condition.

Both grandparents were later cautioned and several chocolate Easter eggs were retrieved from the scene.