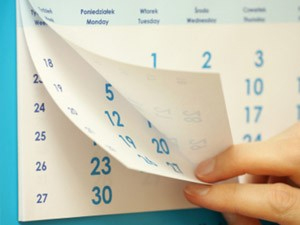 WWN has learned that large portions of the population have spent the day in a state of confusion as to what day it is.

The disorientation is said to be caused by the long Easter weekend and has left many people believing that today is Monday, and many more without any firm grasp as to what day it is at all.

For many, the sense of confusion only set in when they arrived home this evening to find their bins still on the footpath where they left them. Speaking exclusively to Waterford Whispers News, bipedal man Mark Cloghan told of his befuddlement when he discovered his green bin exactly where he left it.

“I landed home this afternoon to find my bin still overflowing with Easter Egg cartons at the bottom of my driveway” said the 32 year old son of two.

“I rang the rubbish company to give them a piece of my mind, only to be told that the bins were collected yesterday. I thought it strange that bins would be collected on a Sunday, until I consulted a calender and found that today was Tuesday. At least I think it is”.

It is believed that the discombobulation will continue well into the week, with more and more people sitting down to watch soap operas only to find themselves a day late.

In consoling news, many people will find themselves enjoying the weekend a day earlier than expected.