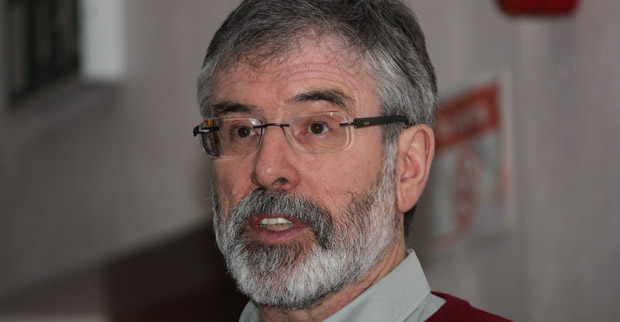 SINN FEIN President Gerry Adams was again called upon to divulge any information he may have regarding the disappearance of several Easter Eggs.

The eggs vanished without a trace over the Easter period, with the sweet-toothed Adams claiming no knowledge of their whereabouts.

“I had a Peppa Pig Easter egg that I left in the cupboard in the kitchen” said Adams’ 5 year old granddaughter Saoirse. “I came down this morning and it was gone; no box, no wrapper, nothing. I have appealed to Granda Adams to come forth with any information he has about my egg, but he has denied any involvement”.

Several other Easter Eggs were also snatched over the long weekend, leaving many of the Louth TDs grandchildren distraught.

The confectionery disappearance brings to mind the notorious vanishings of several Easter treats in the seventies, all of which were linked to Senior members of Sinn Fein. Martin McGuinness’ daughter remembers the night her Easter Egg was taken from her.

“My daddy was having a meeting with Gerry Adams in our house about Easter Rising celebrations” said Saoirse McGuinness, now in her forties.
“I had an Easter Egg that I’d gotten from my Auntie, which I had been looking forward to all Lent. I came down Easter morning, and it was gone. All these years later, I just want to know what happened to it. I just need closure”.

Adams has long denied claims that he even likes chocolate, despite been seen on many occasions eating Yorkies.

Speaking to WWN with the voice of an actor, Adams refused to meet with his granddaughter Saoirse, or his other granddaughter, also called Saoirse.