It is possible to tell how happy a couple are together by their sleeping positions, scientists have found. 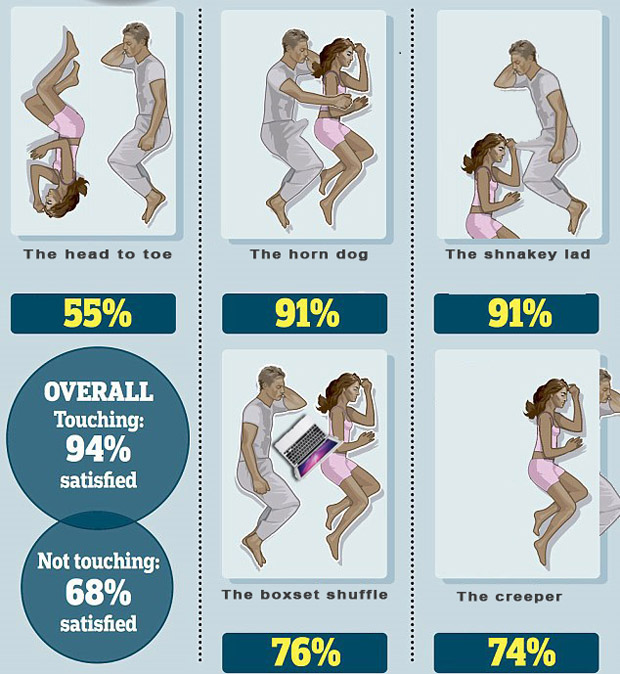 The Head To Toe

In a study carried out by sleep experts in the UK, the head to toe is said to be the second most common of all five major sleeping positions. A below average 55% of couples who regularly sleep in this position claim they were happy with their partner. The study also found that couples who slept like this were in a relationship for more than 10 years. The unhappy 45% claim the reason they were unhappy was down to the position itself, stating foot odour and bunions was a major contributor to their rocky relationship.

The horn dog is said to be one of the most successful position for couple happiness. Men who sleep, rubbing their penis against their partner’s backside said they were so happy with the position, that it made their manhood cry. Morning sex is also quite common with couples in this position. A staggering 91% of couples who sleep like this said they were really happy with their partners.

Women who sleep with their partner’s genitals in their face or hand were said to be the happiest of all the other women in the study. The shnakey lad position was found to be the most arousing of all the positions studied, leading 91% to believe that their relationships were absolutely the shit when it came down to happiness. An estimated 40,000 couples in Ireland sleep in this position, compared to its rival position The Feed The Pony, which reverses the position of the sexes, forcing the man into the nether region.

Found to be the least common of all the five main sleeping positions, the creeper came in high for happiness as it gave partners that all important space they needed during bedtime. Although low on the list for sexual activity, the creeper scored high on the list for other points like: spacial awareness, snoring decimals and fart smelling. Partners who slept under the bed were said to be more caring and empathetic towards their bunking other halves. This position is said to be most popular with middle aged couples with little or no sex life.

Other sleeping positions like the teabag and the hand shandy also rated high among the 18-35 year old age bracket. Join us again next week when we ask the question ‘What Natural Disaster Are You?’.