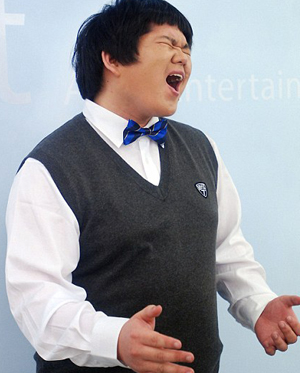 People began booing the Chinese sensation, real name Alan Lee, after he began his act with a song called ‘Back no good’.

“We thought it was a joke at first,” recalled mother of four Janet Casey. “The song sounded the same, but it was being sung by some fat Asian bloke wearing a dickie bow. Everyone started jeering at him and throwing random objects onto the stage.”

Promoters told WWN today that Mr. Lee’s act was mistakenly booked instead of the Take That front man.

“We had no idea there was a mistake until Barry walked onto the stage singing,” said head organiser Gerard Healy. “He was four songs in before we pulled him off. By that stage he was already bleeding after being hit by several missiles thrown from the crowd.”

It is understood the Asian ballad sensation received eight stitches to his head from a flying mascara bottle.

The gig was called off immediately and an announcer apologised to the 10,000 strong crowd for their mistake, and advised them that all tickets will be fully refunded.

A manager for the Chinese act stated that The Barry Garlow Irish tour is also cancelled until further notice.