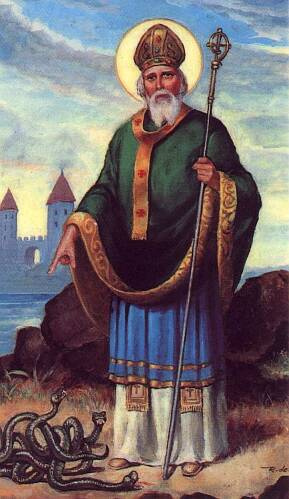 THE People for the Ethical Treatment of Animals (PETA) has called for a worldwide ban on St.Patricks day celebrations due to the missionary’s past history with snakes in Ireland.

The animal rights group said the patron saint was nothing more than a ‘sadist reptile hater’ who took pleasure in killing animals in the name of religion.

PETA stated in a 300 page document released today that the 5th-century Bishop should be denounced by the Catholic church over his history of snake abuse, which totally eradicated the defenceless reptile from the island for good.

‘Saint Patrick to snakes was like what Adolf Hitler was to Jews,’ read the statement, which was openly published on the PETA website earlier today. ‘What he did was genocide – killing millions of beautiful creatures for his own political gain.

‘As People for the Ethical Treatment of Animals, we ask the good people of the world to boycott this farce of a celebration. Patrick was a man who ‘got-off’ on killing harmless animals. Irish people around the world should be ashamed of themselves for worshipping such a charlatan. God would never agree to banish his own creation from any country.’

Saint Patricks day 2014 is expected to be celebrated by over one billion people next Monday, the 17th of March. However, many Irish citizens have already vowed to take part in PETA’s boycott of the event, in a bid to make aware the atrocities carried out by the Irish patron saint.

“I never really thought about it like that,” said one animal rights campaigner from Dublin. “I always knew Patrick banished the snakes from Ireland, but I never asked myself how he did it.”

It is estimated that the British born Christian slaughtered over 300,000 reptiles in his 30 years on the island, from 432 to 461AD.