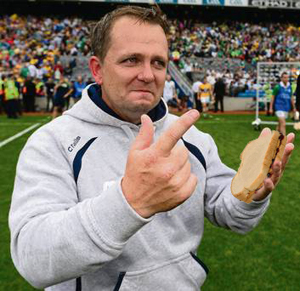 FEASTING HIS sky blue eyes down to the S-Club 7 lunch box resting on his lap, Clare hurling boss Davy Fitzgerald reveals exclusively for the first time how much he hated tomatoes and lettuce growing up as a child.

“I couldn’t even stand the look of tomato’s,” he said emotionally, while unravelling his chicken salad sandwich. “Me mam would eat them whole with a pinch of salt. Whole imagine! Like an apple.”

The revelation still came as a shock to the now 42-year-old, who was by this stage munching his own piece of tomato.

“Staffords sliced bread is the best. It might cost that little bit more, but it’s totally worth it.”

Davy told WWN he ritually makes his own lunch every morning, all by himself.

“I wouldn’t let anyone else make my sandwiches,” he explained. “People never put as much care into making them as I do. It’s the little things like cutting off the cartilage and spreading the butter evenly into the corners.

“If you want a job done right, then do it yourself.”

I asked Davy if he ever considered swapping butter for mayonnaise.

“Not a chance.” he replied, standing up in disgust. “That’s sacrilege man. Us Irish lads were rared on bread and butter. When I first took over Clare hurling team there was a few lads using mayo – but I soon put a stop to that.”

However, I did notice that Mr. Fitzgerald left a couple of crusts in his lunch box.

“I don’t like the burnt ends.” he said embarrassed. “They’re bad for you anyway. Carcinogens and all that craic lad. Sure where would ya be going eating that shite?”

He described how his father made him eat the crusts as a young man, forcing them into his mouth.

“He would always say they were the best part, but how could they be, they taste like shite! I suppose leaving them in my lunchbox now is a sort of rebellion in a way.”

Finishing with an apple, the Clare hurling manager brushes off his tracksuit pants. He looks silently across the training ground, as if listening to his father give out. He smiles, and utters the word ‘leftovers’ under his breath, shaking his head.