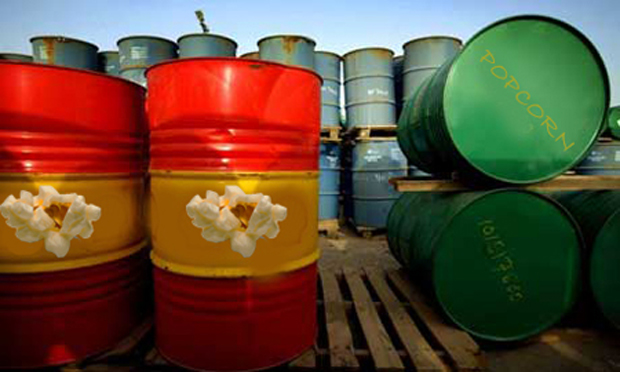 IRISH CINEMAS predicted today that the price of popcorn will climb to €1,000 a barrel before the end of the year.

Political pressure on Ireland from the EU and the depreciation of the euro have caused a surge in cinema popcorn prices.

The ‘specialised popcorn’ has more than doubled in 10 years and has touched a record €900 a barrel in Odeon Cinemas across the UK and Ireland.

A spokesperson for the group said Cinema popcorn prices are expected to reach €1,000 as demand for the movie snack grows in Ireland during the summer period.

“The price of cultivating and producing popcorn is huge.” said Odeon CEO Marcus Wellington. “I am not going to go into it right now, but it is a very complicated and dangerous procedure. The tools needed to actually pop the corn run into the tens of euros.”

Cinema popcorn and chocolate are believed to cost 700% more to produce than its retail counterparts.

“Cinema products taste better, and that’s why they’re a little bit more expensive than what you would normally buy in smelly shops.” he added.

Meanwhile, Gardai claim the recent price surge in popcorn has opened up the path for criminality, stating they have already under-covered several cinema popcorn laundering facilities on the border in Northern Ireland.

“We suspect these facilities are supplying popcorn to smaller scale cinemas across the country, and turning over a tidy profit in the process.” said chief Insp Dermot Burke.

“Many of these criminal gangs would have ties with the Fake IRA.”

Garda Burke says over 40,000 barrels of what is believed to be laundered corn was also discovered, along with 16,000 litres of cooking oil; an essential ingredient in the popcorn-laundering process.

The CAB has frozen more than 14 bank accounts suspected to be linked to the operation, including that of former Storm cinema owner Gerry Brent.