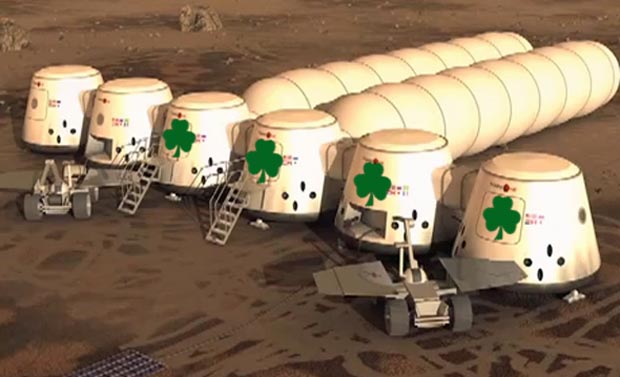 SPACE exploration company Mars One said today that it has been inundated with requests from unemployed Irish people hoping to emigrate to Mars.

Yesterday, the private company announced that over 50,000 Irish men and woman volunteered for the one-way mission to the red planet. However, only 1,058 people were shortlisted from around the world to undergo the selection process for the manned space mission.

Dr. James Roche, who was the only Irishman to be picked by the non-profit organisation, said he would wait to get settled first before calling on friends and family to come over.

“Once I get a decent gaff sorted on Mars I’ll let the lads back home know the craic.” said the Bachelor of Arts in Physics and Astrophysics. “There should be a rake of building jobs going over there in a few years.”

“Sure, jobs in Australia are already drying up.” he added.

Irish Pub chain O’Neills said it already has plans to build a 4,000 sq foot bar on Mars in 2025, and promises the same good food and drink as they provide here on planet Earth.

At home, the government stated it will provide full training to anyone on the live register willing to leave Ireland for Mars.