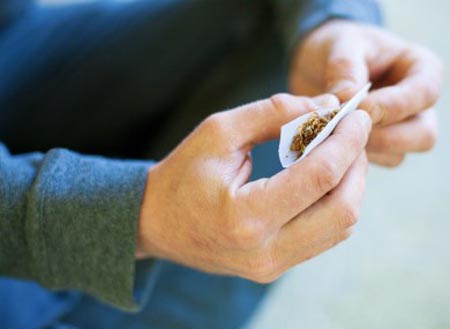 A NEW Study carried out by the Central Statistics Office has found a dramatic increase in the number of joint rollers ‘top-loading’ splifs at house parties, in an unfair bid to get higher than everyone else.

It was found that the act of packing weed at the start of the joint by the roller has risen 75% since 2008, coinciding with the beginning of the credit crunch.

“The roller knows he has the automatic right to light the joint upon its completion, regardless of who owns the smoke.” explained head of the CSO study Prof. Simon Hogan. “Top-loading the hand rolled cigarette in favour of his or her turn has unfortunately become common practice across the Republic, leading to many altercations at house parties and festival events.”

The study also found that 98% of house party arguments are directly linked to ‘cannabidioms’.

“A common cannabidiom is when someone misplaces or loses the lump of grass or hash while rolling,” said Hogan. “Cannabis educed paranoia ensues where people end up blaming each other for stealing the contraband. This then leads to further verbal feuds, mostly relating to past doubts and issues between the arguing parties.”

Following the report, the CSO has released four top signs that someone is, or has been top-loading joints:

Unusually potent smell from joint once lit compared to normal
Refusal to let anybody else light joint
Always volunteering to roll for others
Insists friend or girlfriend goes next on pass
If you were affected by any of the issues raised in this article, please feel free to comment below, where a member of the WWN team will be on hand.