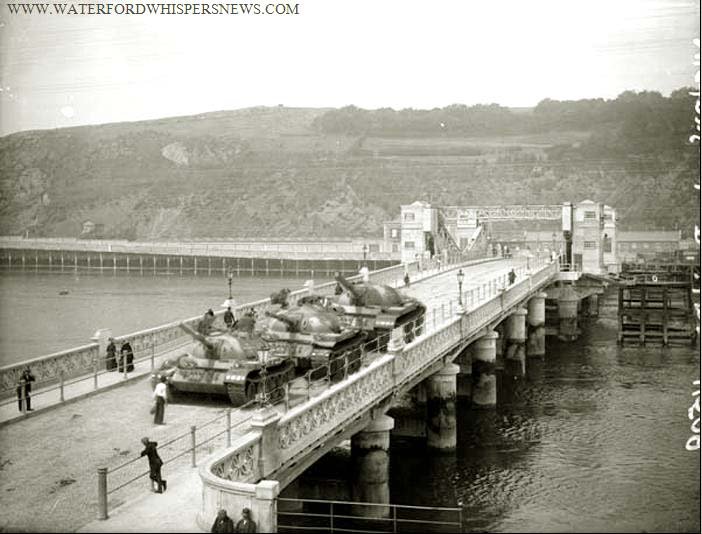 Danny Suir, from Ballygunnar county Waterford,  was a disgruntled iron-smith who was laid off by the British army in 1915.

He worked for 13 long years building munitions in a local steel mill which supplied materials for the war.

One sunny day in June of that year, and after 14 pints of Hoffman’s, Danny decided enough was enough and he was going to take a stand against his old employers. He knew British army tanks and jeeps were ferried out of Waterford port on a regular basis, and if he waited long enough he could put a halt to their operations.

At approximately 5:47pm on the 6th of June 1917, Mr Danny Suir stood on the toll bridge waiting for the daily military convoy to arrive.

Three tanks came slowly over the toll bridge heading straight for the otherside. Danny, being strong of heart and mind, was determined to stand his ground. He stood tall as his fellow Waterfordians watched on behind him, egging him on to never back down.

Regrettably for Danny, each tank weighed 22 tonnes and was powered by a 3000 horse power engine, and on this particular day there were three of them. His 12 stone 7 pound body was no match for the convoy and was horribly squashed like a plum onto the hot sticky tarred bridge.

Later the Lord Mayor of Waterford decided to rename the river that flows underneath the bridge after Mr. Suir as a mark of respect to his brief, but memorable stand.

Danny will always be remembered for his courageous behaviour that day, and his ghastly entrails.