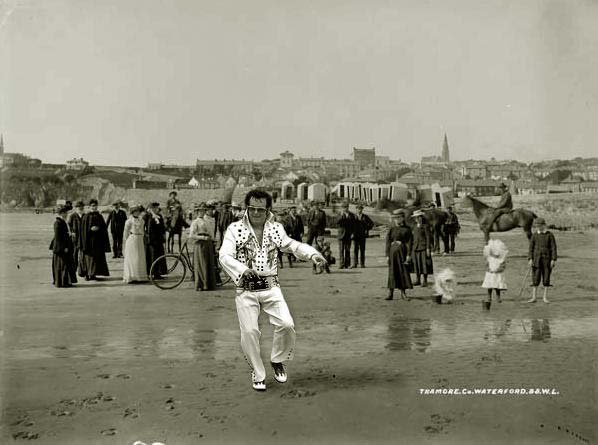 Due to a ban on pelvic gyrating in 1902, Rocky Mills could only perform his one man show at certain times and places during the day, usually on Tramore beach during low tide, and strictly after watershed (6pm).

Mills soon became a local legend and drew spectators from all around the country to the seaside town every evening.

Not only was his music ahead of it’s time, his hip movements caused somewhat of a controversy with the local Catholic church. So-much-so that the then 19-year-old was excommunicated in 1911 by Tramore Parish Priest Fr. Declan Ahearn for promoting the ‘work of the devil’.

It wasn’t until 1947 that a new law was passed to facilitate Rocky’s crude ‘way of dancing and singing’.

Since then, his career has gone from strength to strength, playing in some of the hippest venues the country has ever seen, including the Tramore GAA centre in 1987.

Mr. Mills still performs today in his home town of Tramore at the ripe old age of 122 and is currently seeking Guinness book of records recognition for the title of ‘Oldest Elvis Impersonator in The World’.

He is often copied, but never equalled.