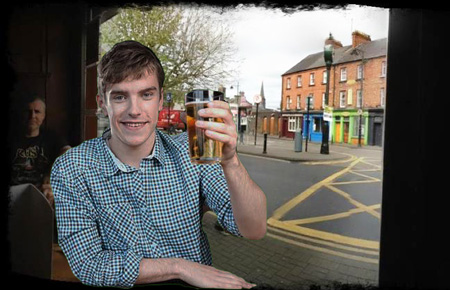 WATERFORD CALL-CENTRE employee Richard Jones is said to be devastated today after his aunt from England died for a third time this year.

The Eistec customer service representative only found out about the terrible news after leaving a local niteclub in the early hours of this morning.at 9am this morning.

Supervisor Terry Green told WWN that Mr. Jones was so upset on the phone this morning that he was actually ‘slurring his words’.

“Poor Richard was meant to be in

“I got a phone call from his sister at about half past saying that their aunt in England died and Richard wasn’t going to make it in today.”

“I couldn’t believe it. This is the third time his aunt in England has died this year.

“I decided to ring Richie back at lunch time to pass our condolences.

“He sounded very upset and was slurring his words; not making any sense at all.

Mr. Jones’ aunt Theresa first died of a massive heart attack on new years day this year. The Eishtec employee was then granted personal leave to attend the funeral in London.

Shockingly his aunt died a second time on the 18th of March – the day after Patricks day.

Colleagues at the call centre whipped around and bought a wreath for the dearly departed mother of six.

However his sister Julie told WWN that he will probably be out of work until after the Easter holidays, saying: “We’re all devastated over the death of whats her face and will probably settle our nerves in Geoff’s later with a few frosty cold ones.”

“We just ask that no one ever brings up the subject of her death with Richard as they were very close.”