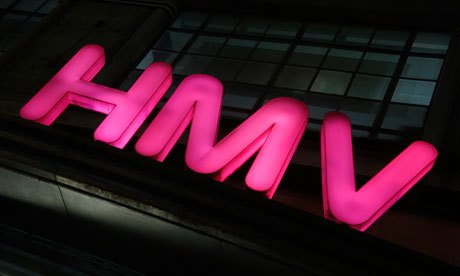 A SPOKESPERSON for HMV suggested to voucher holders today to ‘download’ their movies and music like everyone else does.

In a statement to WWN, the company apologised to people who were stuck with the now useless vouchers, but defended their decision to not except the pre-paid credit slips in any of its 16 Irish stores.

“Its just too bad really.” said spokeswoman Martha Shields. “Best download whatever music you want –  like all the other fuckers have been doing lately. ”

Ms. Shields pointed out the stupidity of people who bought vouchers as a gift for friends and family before Christmas.

“Sure that’s like buying shares in Anglo Irish bank.” she said.

There are fears for up to 300 jobs in Ireland and another 4,000 in the UK after the company sought protection from its creditors by going into administration.

Earlier a naive old person who bought a voucher for his grandson, strolled out of the HMV on Henry Street with three computer games, having failed to persuade shop staff to take the voucher.

“I showed them so I did. Look what I got! He’ll be delighted.” he said.

HMV said the grandfathers actions were ‘pathetic’, and claimed the last laugh will be on his grandson and not the store.