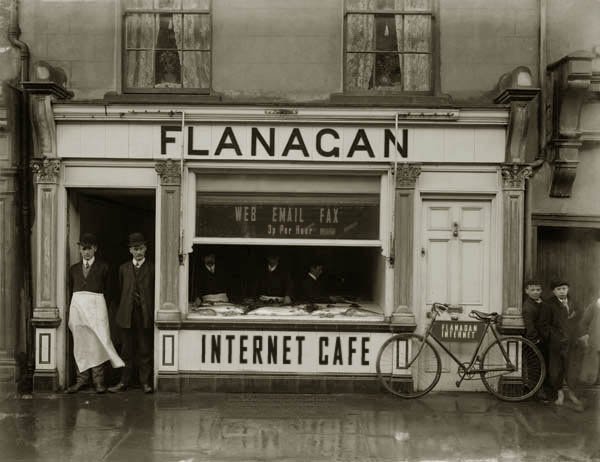 Because of his crack pot business ideas, Thomas Flanagan was regarded as ‘a mad-man ahead of his time’.

His ‘Internet Cafe’ venture was not only unheard of, it made absolutely no sense to the people of Waterford.

Thomas spent hours trying to explain to people that one day a global system of interconnected computer networks will use a standard Internet Protocol Suite (TCP/IP) and will serve billions of users worldwide.

He struggled to describe it as a network of networks that will consist of millions of private, public, academic, business, and government networks, of local to global scope, that would one day be linked by a broad array of electronic, wireless and optical networking technologies.

After four long weeks of ‘cold calling’ potential clients and pitching ‘bizarre photocopying tariffs’ to local business men, Mr. Flanagan was finally arrested for harassment and sent to the local mental institution for an evaluation.

Little did he know at the time that he was the first Internet cafe owner in the whole world, but also the first frontal lobotomy patient to be ever treated in Europe.