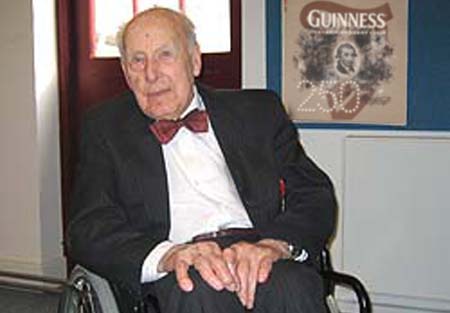 THE YEAR 2009 was a time when millions of people around the world celebrated the 250th anniversary of  the Guinness brewing company and its founder Mr Arthur Guinness.

It was a time of global economic fear. Businesses were closing. People immigrating. For Monkstown man Paddy Moran, then only 89, it was a chance to celebrate his favourite beverage, ‘the creamy bottle of shtout’. After all, during any recession,  Guinness played a tremendous role in the liquidation of the Irish people.

“I remember it like it was only yesterday.” said the great-grand father of ten, as he sat sipping his half glass of shelf warm pale.

Prior to the interview we agreed to meet in his favourite watering hole – Goggins –  in the village square.

He continued: “Times were different back then. There was an innocents in people that was pure and good, not like you’d see today.

Reminiscing, he said: “Dublin was alive that September morning. Everyone was excited as there was going to be plenty of dancing and music later in the evening.

“It was amazing to see everyone so happy in what was such a miserible time in history.”

Only the year before, Ireland was officially in a desperate recession caused by greedy bankers, crooked politicians and property developers.

“There was no recession that day I tell you.” laughed Paddy as he cleaned his pipe before crumbling a large nodge of Afghani black into it.

“I remember getting a telegram from one of my old pals. He said to come down to The Tripod as David Holmes was there pumping out some fat beats.

He then recalled the large queue of people waiting outside to get in.

“The weather was mild enough and everyone was in high spirits and couldn’t wait to get in.

My mate Paul arrived on with a bag full of speckled Mitsi’s and we shared them out with everyone in the queue.”

“You wouldn’t get that now.” he added.

Paddy stopped, wiped his glasses and moved ever so slightly to his right, before leaving a fart escape from his buttocks and into the path of a passing waitress.

She recoiled in horror.

Obviously emotional, he continued to describe the atmosphere in the Tripod on the 27th of September 2009.

“Back then you had none of this violence in pubs as you do now. People were just in there to celebrate Arthurs day and our national beverage.

I could tell everybody was enjoying themselves as they were literally falling over their jaws on the dance floor!”

Holmesy was banging out some dark shit back then. It was indescribable”.

Changing the mood, I asked Paddy what he thought of the Arthur’s day of today.

He paused, took a hit from his pipe and said: “It’s too main stream now. The whole Arthurs day thing is gone way too commercial. People seem to forget what it is they are exactly meant to be celebrating.”

“Its a shame really, but thats the way the world has gone.”

Sadness seemed to overcome Paddy after his revelation. He pulled back from our conversation before being wheeled off by a nurse into an awaiting HSC van.

In conclusion, I think Paddy was right. People have lost their way a bit, but then again, 2009 was a different era in Ireland. Maybe we’ve just evolved. Maybe its just meant to be. Maybe Arthurs day was always that way.

Whatever the case maybe, its still a good reason to drink and get drunk. And that’s what its all about.