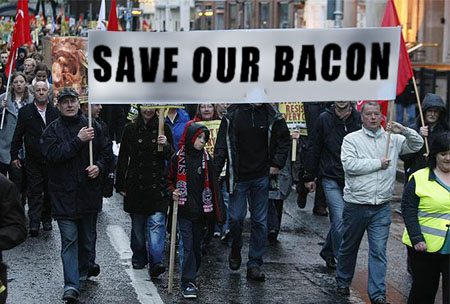 UP TO 500,000 angry Irish citizens took to the streets of Dublin today in protest of a possible bacon shortage about to sweep the country in the coming weeks.

Violent clashes between Gardai and protesters escalated onto the capitals main streets in what has been called ‘the straw that broke the camels back’ by the countries media.

At least 6,000 demonstrators were arrested and 700 injured, as clashes continued late last night, WWN can report.

Witnesses claim the Mass hysteria was brought on by news of droughts in the US and Russia that are threatening to curtail the countries bacon supply.

“They can charge us for our water. They can tax the bollocks out of us for property. But do not take our God damn bacon!” said one extremely angry protestor outside government buildings yesterday.

This protest has so far been the biggest the country has ever seen.

Garda spokesperson Supt Intd Paul Mockler told WWN that he fears this may spiral out of control and spread to other cities around Ireland.

“It’s just madness. There is every walk of life involved in this and thats what makes it scary.”

“I haven’t seen this  many overweight people taking to the streets since last years women’s mini- marathon.” he added.

More than 9,300 Gardai in riot gear have been deployed throughout the day in preparation for the ‘Save Our Bacon’ demonstration, with barricades being set up and an emergency supply of cocktail sausages on standby.

“If it gets out-of-hand we will be forced to fire the sausages into the crowd like rubber bullets.”

“Hopefully that will distract them while we apprehend the troublemakers”

The protest, promoted over the Internet by fundamentalist pork eaters, was mostly targeted at over-weight families who depend on pig meat for their survival. Protesters said that the bacon shortage was the absolute breaking point and that they were also fed up with all that other important austerity stuff as well.