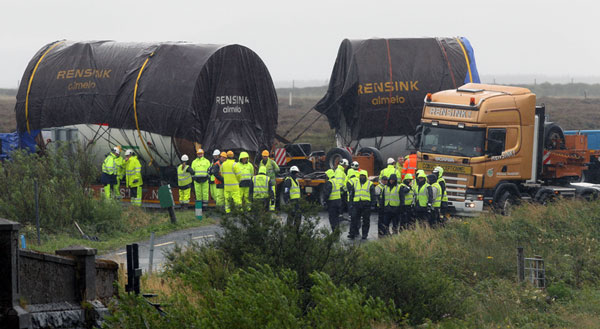 SHELL CEO Peter Voser admitted today that the shell-to-sea protesters have really got the multinational oil and gas company by the balls after a truck carrying drilling equipment for the Corrib project got stuck on a road yesterday.

The worlds largest oil company was said to be on the verge of collapse following the incident, according to demonstrators at the scene.

Mr. Voser addressed the media earlier this morning and admitted that he underestimated the power of the Irish people.

“Those crusty Irish bastards really got us by the balls now.”

“We are going to have to rethink our whole strategy moving forward and may have to suspend the Corrib project indefinitely.” he said winking.

Tensions were running high in Co Mayo yesterday after the truck tried to take a sharp bend in the road and got stuck.

Protesters then attacked the vehicle with large sticks, scraping the paint on its exterior.

Professional campaigner Mhuireach Ni Shoe amhainn told  WWN that this was a major victory for everyone involved in the Corrib pipeline dispute. “Karma did this. Not us. We were just channelling it.”

However, victory cannabis joints were soon extinguished as the truck driver simply reversed the truck back up the small road.

Campaigners initially tried to block its path , but were no match for the sheer power of the 160 ton vehicle and the 4,000 Gardai who were assigned by the government to protect the multi-billion euro corporation at the cost of the Irish tax-payer.