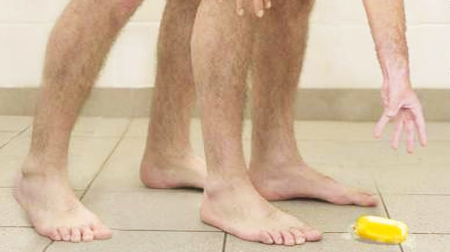 THEY say you can’t keep a good entrepreneur down, and they may be right, as inmate Sean Quinn Jnr applied for a patent on the worlds first non-slip soap today from his cell in Mountjoy prison.

The son of bankrupt businessman Sean Quinn made the application at 9am this morning following, what his lawyer claims were,  ‘numerous shower embarrassments’ since his incarceration began over two weeks ago.

“Sean said he could not explain exactly what happened inside, but he really needed to invent a soap that wouldn’t slip out of his hands while showering.” said Quinn family lawyer Martin Ransbottom.

One source close to the man claimed that he was probably ‘bored’ in the shower and needed to “vent his entrepreneurial talents.”

Junior was jailed for three months when he failed to adequately comply with a series of coercive orders made by the court at stripping assets from the family’s international property group.

Since beginning his sentence in the Dublin facility, the something something year old had made numerous complaints to prison staff about the communal showering system, asking to be segregated from the rest of the inmates.

Mr. Quinns wife stated that Seany was always a bit shower shy and would even lock the door in his own home while washing his bits.

Unfortunately for the spit of his father, the patent pending is expected to take up to 12 months to pass and the non-stick soap will not be available in the Irish prison system for at least two years.