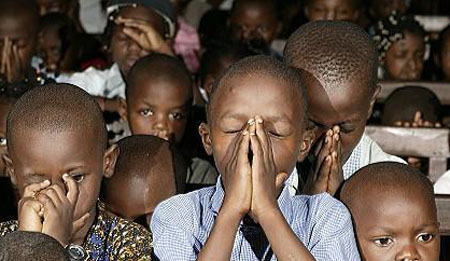 MILLIONS of third world children were said to be in prayer for Robert Pattinson this week, as news of the stars dramatic break up with Kristen Stewart swept the poorer nations of the globe.

In Ethiopia, government officials have called for a month of mourning for the Twilight actor as the country comes to terms with the infidelity, which took place in Stewart’s vagina earlier this year.

The UN have stated that many starving children across Africa have vowed to fast during this period of mourning as a sign of respect for the 26-year-old king of acting.

It is estimated over 300 million men women and children from around the world will join in prayer over the next three to four weeks.

A UN spokesman said he is not sure how long the prayers for Robert Pattinson will last, but expects it to go well into the month of September.

“I suppose it has affected everyone in some way.” said General Markus Longheart.

“We have had well wishes from places like India, Iraq, Afghanistan and even North Korea for Rob.”

Pattinson is said to be hauled up in his bedroom for the last week at the revelations about Stewart’s relationship with Rupert Sanders – the father-of-two who directed her to do stuff to his penis.

While his parents are consoling Robert in California, they are said to be very worried about his health, as he has only eaten a packet of crisps since returning home.

“He just wont come out and insists that he’s not hungry. He must be starving!.” said a friend close to the family.

“Hopefully all these third world prayers will reach him somehow.”

Meanwhile, thousands of first world husbands and boyfriends were triumphant as the Twilight saga loses its appeal with wives and girlfriends everywhere.