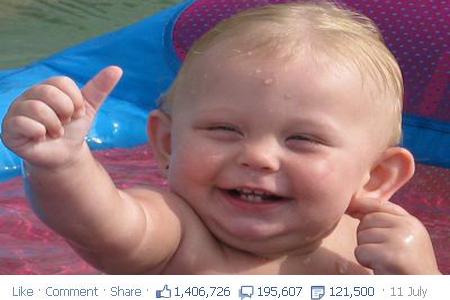 A REALLY sick baby was said to have miraculously recovered this week shortly after its picture reached one million ‘likes’ on the social networking site, facebook.

The heart-wrenching photo of four-month-old Timmy Jacobs was uploaded in March by a concerned friend of the childs family.

Fortunately for little Timmy, he received nearly one and a half million prayers to God, and is said to be all better now and back living with his parents in their house somewhere on the internet.

Sources close to the world wide web said today that Timmy was diagnosed with a really incurable illness when he was just one month old, and that there was absolutely no hope for him making it to his first facebook birthday.

Since news of his miraculous recovery, thousands of sick children photographs have been uploaded to facebook in a bid to cure them with one million likes.

Earlier this week, facebook founder Mark Zucherberg denied there was a direct link between facebook likes and prayers to God.

However, a spokesman for the site stated there will be a substantial fee introduced in November for all sick children photographs that pass the one million like mark.