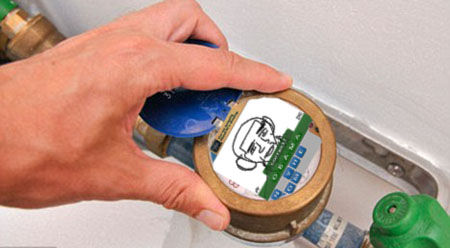 THE GOVERNMENT announced today that all new water meters will include a ‘draw something’ app for the first one million lucky customers.

Taoiseach Enda Kenny unveiled a prototype version of the new water measuring device this afternoon which has a circular 5 inch touch-screen display unit mounted on its head.

The free gaming application will work in conjunction with the meters main goal and promises the famliy hours of endless fun and entertainment for the foreseeable and taxable future.

“There is only one question that comes to my mind after operating this fantastic piece of engineering, and that is: How soon can I get it installed?” said Mr. Kenny.

Chinese Manufacturers of the ‘Meter something’ say the devise is also equipped with a mobile signal which enables families to play other famillies across the nation.

The leader of the free state of Ireland praised the ingenuity of the Chinese firm and later signed a €80 million euro contract with them for the immediate outsource and manufacture of two million units.

A standard charge of €40 euro per meter is expected on the first million Meter Somethings.

Charges are then set to increase to €60 with an additional €10 charge for the Draw something app add-on.

“You’ll have to be quick as we expect the first million to sell like hot cakes.” said the Taoiseach.

“And you don’t want to be the odd one out like a sad little Paddy-no-mates now do you?”