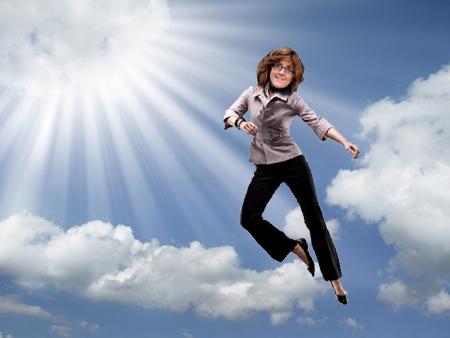 FINE GAEL TD Michelle Mulherin dramatically ascended back into heaven this morning in front of hundreds of spectators claiming that her ‘work here was done’.

The single forty-year-old explained to mere mortals yesterday that sex between an unmarried  male and a female was the biggest cause of unwanted pregnancy in Ireland.

She caused heated debate with her use of the 16th century phrase ‘fornication’ during a talk on abortion legislation yesterday, but experts believe that she may have been sent down from God himself to warn us of our sins.

“She obviously knows something we don’t know” said absolutley everyone today.

“Judging by the way she spoke, and then just rising into heaven like that, we’re guessing she must have been some kind of angel messenger.” we added.

Over 107 people witnessed the ascension this morning which took place in Castlebar town centre.

“She just gathered everyone around and started handing out loaves of bread and fish.” said one eye-witness.

“Then the clouds parted above her pretty head and she said ‘My work here is done’, just before taking off into this beautiful ray of light”

The Ballina solicitor is said to have disappeared into the clouds at 11am, leaving spectators praying on their knees.

“Some people were chanting decades of the rosary and crying.”

“It was an emotional scene.” said local fisherman Thomas Bridges.

It is not sure where Ms. Mulherin actually ascended to, but many Christians believe she was needed back in the kingdom of heaven to help sort out some really important stuff.

Since this mornings miraculous event, locals have erected a make shift grotto in honour of the ‘virgin daughter of God’.

Local councillor Thomas Kinsella told WWN earlier: “Hopefully we can all learn from Michelle and move on with our lives.”

“Let this be a lesson to couples living in sin who continue to have sexual relations out of wed-lock.”