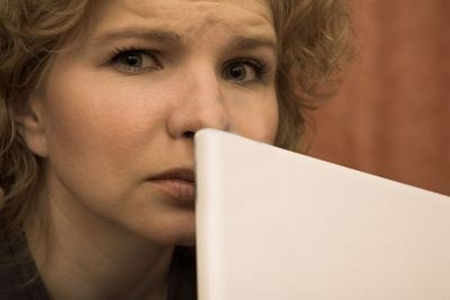 Lara Hurley (28) is said to be ‘very worried’ about her symptoms as they are ‘exactly the same’ as the symptoms one would have if they had a ‘Haemangioblastomas brain tumour’.

“Haemangioblastomas are a rare type of tumour that develops from the cells that line the blood vessels in the head. They are benign and grow slowly so thats why I have been getting headaches for the last 5 years.” she explained.

Martin Hurley told WWN that this is the fourth major health scare his wife has diagnosed herself with this week.

“Sunday she had colon cancer, but that turned out to be the number 45 with fried rice she ordered from the golden elephant the night before.”

The long distance truck driver showed no sympathy as he continued: “Tuesday she nearly died twice as she woke up to a blood cloth in her left leg, but that went away after the pins and needles died off.

“Later she had a full blown heart attack in the kitchen, but was miraculously able to log-on to Wiki and diagnose it before calling the cardiac ambulance.”

“The woman is tapped!” he added.

“I kinda feel stupid now after spending so much money.”

“But at least I know now I’m not dying. Right?”

Self diagnosis on the internet is estimated to cost the tax payer €4bn euros a day.

If you are worried about any of the issues raised in this article then please just STOP!

You’re grand girl. Go for a walk or something.