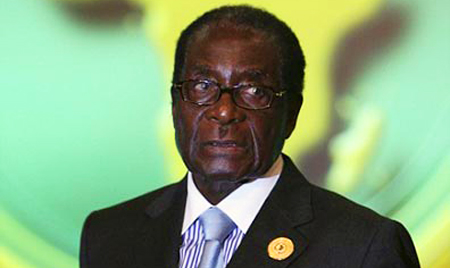 ZIMBABWEAN dictator Robert Mugabe told family members and friends last night that his only regret was never featuring in an internet viral video campaign like ‘Kony 2012’.

The cancer stricken leader flew to Singapore by private jet on Saturday for treatment, but took a turn for the best and is said to be suffering excruciating pain in his final moments of life.

The 88-year-old tyrant told his wife Grace that he hopes Joseph Kony is ‘proud of himself for achieving so much for doing so little’.

“He would shout and scream at the TV every time there was news on Joseph or that crazy naked guy who made the film.”

“I think he just gave up after that.”

“The crowning of the new king of African bad-boys had a detrimental effect on Roberts health.” said Singapore doctor Ping Jung Hoe.

“We don’t expect him to last the night.”

The Zimbabwe Daily Mail said the leader, who has ruled the country since 1980, was pretty much ‘fucked’ but has demanded that defence minister Emmerson Mnangagwa be his successor.

There is already talks of a viral ‘Mnangagwa 2013’ video on the cards, which will no doubt outline how mean and bad-ass the new leader will be.

Sorces claim Michael Bay has already been approached to direct the short film, but has not responded yet.

Our thoughts and prayers are with the Mugabe family at this moment.