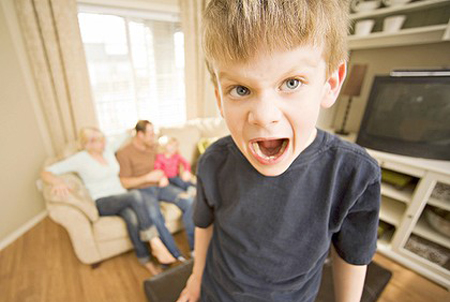 CHILDREN who show the early signs of bad behaviour are said to be directly linked to being ‘spoiled little shits’, new research suggests today.

In contrast, children who were not ‘spoilt rotten’ by their parents and extended family were less likely to create publicly embarrassing situations during childhood.

It suggests that the traditional notion of ‘discipline’ and ‘not giving them everything they ask for’ could have a scientific basis.

Psychologists at Oxford University, who carried out the study, also suggested the findings could help explain the origins of ‘little shit syndrome’ (LSS)  with lazy, fat arse types who are too selfish to care about their children’s well being more likely to ignore the basic rules of parenting.

The team lead by Dr James Kent asked several groups of parents from different social backgrounds to perform a series of tasks designed to discipline their children.

The study found that parents who let their children run wild and do everything they bloody well please are twice as likely to turn out to be spoilt little shits. Whereas those who were actually fearful of their parents ground rules were not.

“Little shit syndrome can only be treated at a young age.” advised the doctor. “If the child reaches puberty while still being a little shit, then they are more likely to remain ‘shits’ for the rest of their lives.”

The study also found the number of shits in Ireland has increased by over 150% over the past twenty years.

“The Celtic tiger and its false economy was a breeding ground for little shits.” added Kent. “Thankfully a lot of them have now immigrated abroad, hopefully this new generation of Irish realise they can’t get everything they want.”

If you are worried that your child may have LSS, please feel free to contact the little shit website at www.smack-across-the-arse-now-and-again.com