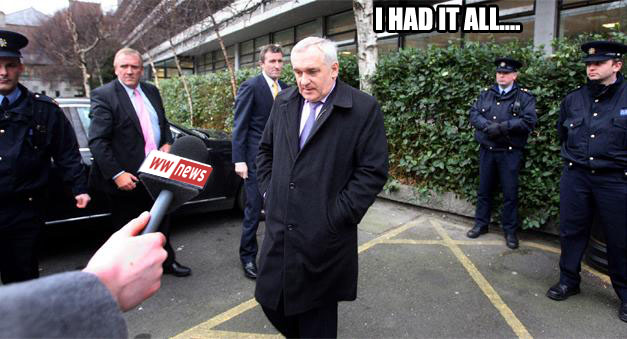 The Mahon Tribunal has published its final report on corruption in the planning process yesterday.

Below is a list compiled by WWN of the reports key findings. As we see them.

And if you can get a cut of that €20, 000,000 a year budget then why not drag that mother fucker out as long as you possibly can? Hence why it took 15 years to do something which would normally take a few months for an average paid judge and a handful of solicitors to complete.

Here, I’ve an idea: why not put the Mahon tribunal through a tribunal for spending so much on the tribunal?

He is incapable of feeling guilt, remorse or empathy for his actions. He is cunning, manipulative and knows the difference between right and wrong but dismisses both when they apply to himself. He is a pathological liar who actually believes in his own bullshit.

In other words: all the makings of a brilliant leader. So what went wrong?

3 Bertie Ahern just got caught-out in the end.

He got caught with only a tiny fraction of what he made through ‘dig-outs’ from developers.

Lets be honest here. He was always clever in his dealings. He learned from the best in the land (Charlie) on how to hide, launder and invest his money.

And he would have gotten away with it too if it wasn’t for those meddling solicitors, and of course that silly cow Celia for messing up a simple banking transaction.

Let me rename this third Key finding to: ‘Never trust a woman to do a man’s job”.  That is all.

4  Always blame as much shit as you can on the dead guy.

This was probably another reason why the tribunal went on for so long. They obviously knew one of these old pricks would die off or get taken out by a glitzy car crash at some stage.

Judge: “So Mr. Developer, please tell the tribunal which one of these men you paid money to.”

5 Lobyists will always fuck you over when the shit hits the fan.

Like a bag man or a street dealer – never trust them. They will always rat you out in the end.

In the underground world, Frank Dunlop is a snitch.

He would have been disembowelled 14 years ago, saving the country €300 mill in the process. But this is not the underground, this is politics, and Frank Dunlop is a hero for doing what he did. No matter how illegal and immoral it may be.

He did however get 14 months in jail for corruption.

I know guys locked up longer for smoking a plant that grows from the ground.

6 Findings of corruption were made against 11 councillors.

Shock! This is a small percentage. Most politicians are corrupt. The ones that get caught are just really bad politicians. It’s the squeaky clean ones you have to look out for.

The only way we’ll get honest politicians in this country is if we pay them an average wage with no quirks or freebie’s.

“Get a taxi to work ya gobshite and start collecting those Costa Coffee loyalty cards like the rest of us!”.

What really would have made this whole Tribunal worth while would have been Judge Alan P. Mahon standing up at the end of proceedings and slow clapping the findings of the final report.

Everyone would then join in unison wiping tears of joy from their freckly faces, chanting ‘we did it, we fucking did it Alan!!’.

Bertie Ahern would then be whisked off to a hard labour camp in Cambodia to work out the rest of his days as a mine sweeper.

Then from this day on politicians would just cower in fear at the slightest hint of corruption.

Ireland would immediately come out of recession.

The state companies would buy back what is rightfully theirs from the evil shitbag corporations of the world.

*does a little jig into the sunset*