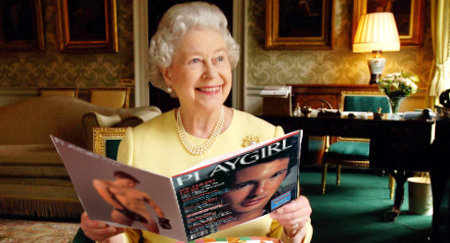 THE Queen of England said she was ‘fucking stoked’ about her upcoming diamond jubilee celebrations, which will take place on the week-end of the 2-5 of June this year in London.

The 85-year-old monarch told press today of her excitement when she arrived in King’s Lynn as she marks the 60th anniversary of her accession to the throne.

“This party is going to be sick.” she said.

She also said she felt a bit “hungover” after a warm-up party last night in the palace.

“I can still taste the Jagerbombs when I pewk.” she added.

The Queen was handed a glass of water and two Alka-Selzer as she arrived at King’s Lynn Town Hall, which she later knocked back like a pro.

The Duke of Edinburgh whispered loudly into her ear  ‘theres nothing like a bit of German in ya’, and they both laughed.

Thousands of unemployed spectators gathered to greet the Queen at King’s Lynn Town Hall , despite the snow and obvious lack of party snacks.

There will also be a 21-gun Royal Salute at Edinburgh Castle at noon to mark Liz’s 60 years at the top.

It is estimated the celebrations will cost the English tax-payer absolutely nothing as the entire event will be fully funded by 10 million barrels-of-oil kindly donated by the good natured people of Argentina.