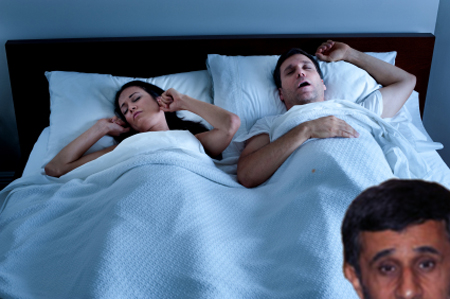 The US director of national intelligence said Iranian special forces, who are hiding all over the world, were plotting to eat random babies in a sick and evil operation code named ‘Nom Nom’s’.

Clapper claims that no home is safe from the treat and has advised every parent who lives in countries opposed to the Iranian government to ‘be very very ready’.

“These people are dangerous and sick.

“They can sneak into even the most secure home without making a single sound.”

“These specially trained soldiers are kind of like ninja’s, only one million times more dangerous and crazy.”

“I seen one of these guys eat the entire population of an Israeli town just because some Jewish shop-keeper over charged him for a loaf of bread.” said Clapper

Meanwhile, the US and its allies are organising a ‘protection strategy’ for the worlds babies and have stated that the only form of defence is a swift and military attack on Iran and it’s baby eaters.

American president Barak Obama has asked worried parents to be vigilant in their children’s time of need: “Being eaten alive is probably the worst death imaginable. But please, do not panic.”

“We will fight this menace with everything we’ve got. If we have to go to war to stop our children been eaten then so be it.”

Meanwhile, the Iranian government has denounced the baby-eating threat as ludicrous, claiming it is not physically possible to eat a whole baby without making any noise.