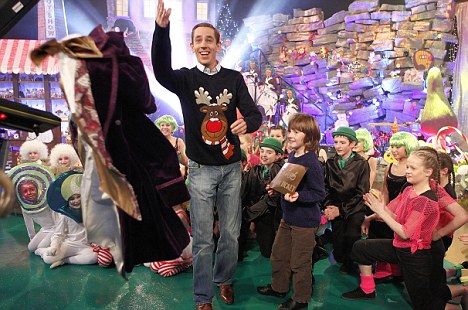 RTE have defended their decision today to air The Late Late Toy Show from the north saying it will save the station €200k in toy costs.

The dramatic move was labelled ‘pathetic’ and ‘not all that clever really’  by numerous broadcasters and licence fee enthusiasts around the country.

One man told WWN: “It’s getting a bit ridiculous now. Sure this defeats the purpose of ever breaking away from the Brits. We might as well pack our bags and move up there ta fuck!”

The 25% saving was slammed by economists, saying the hidden cost of the move was not accounted for in the stations briefing today.

Prof. of economics Dr. Michael Jacob’s stated that the station was only taking away business from the country and not actually saving anything in the long run.

“It will eventually come back to haunt them somehow. Like some kind of sick Karma cost. Yes. Thats what it is. A sick karma cost type thing.”

Late late show presenter Ryan Tubridy said he was looking forward to the venue change and added that it would be good for relations between the two countries.

“I think it’s a great idea.

“The crew can all get their shopping done. We meet a few northy kids. Try and understand what the hell they’re saying and go home. Sorted!”

The Cross-border Late Late Toy show is due to air at 9:30pm this Friday.