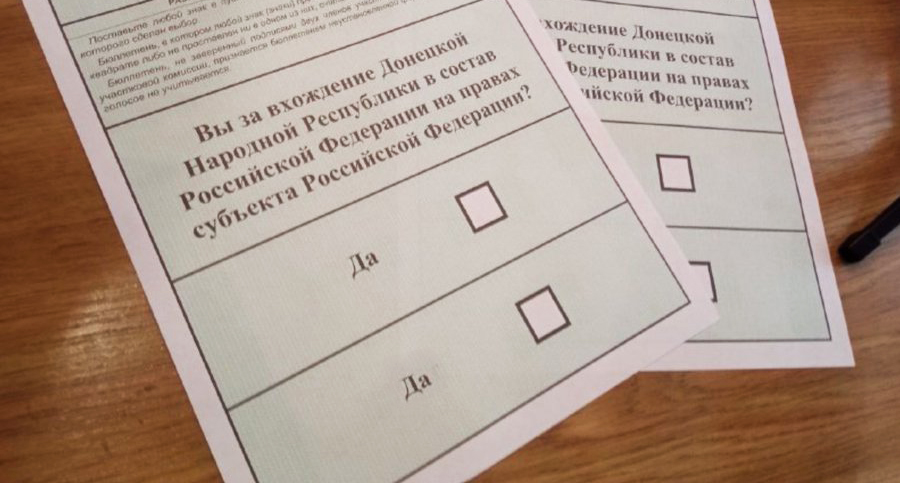 RELEASED images showing ballot papers handed out by Russian officials for today’s annexation referendum in Eastern Ukraine were found to have two ‘yes’ options, with a landslide victory for Vladimir Putin’s next landgrab expected.

Voters flanked by armed Russian ‘voting assistant troops’ were ushered into designated polling stations at gunpoint, a measure aimed to ‘protect’ voters from being influenced by Western spies.

“No, we’re not aiming directly at their heads while they vote yes,” one Russian official explained the reasoning, as a distant gunshot was heard followed by a sickening thud of a no voter body hitting the ground, “we’re aiming at any possible infiltrator from approaching and brainwashing the good people of eastern Donetsk and Lugansk regions – it’s just a deterrence, really”.

The referendum was suddenly called after Putin announced this week a mandatory troop call-up for about 300,000 reservists, which is in no way a sign that Russia is now losing ground and looking a bit desperate, but instead all part of the initial plan.

“No, no, all these people are voluntarily voting here today,” the official added, as armed truckloads of ‘voters’ were marched from the back of Russian army trailers by the armed ‘voting transport police’, “and what an amazing turnout here today and I would like to thank our transport police for getting all these voters here safely this morning – in fact, these people are so eager to vote yes we’ve given them 5 ballot papers each”.