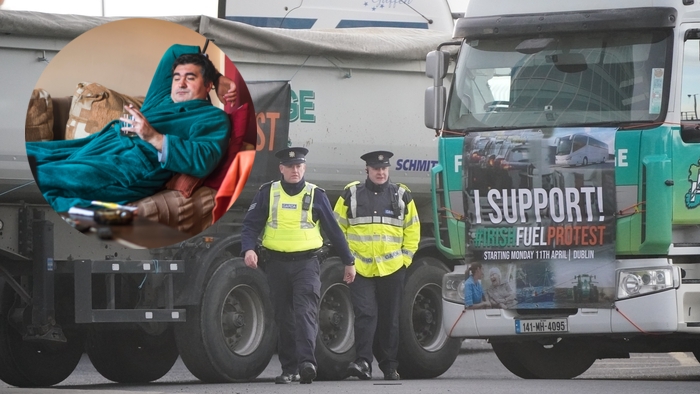 THE FIRST EVER example of large numbers of people online vowing to take part in a protest on an unprecedented scale only to never turn up has occurred in Ireland, WWN can reveal.

Local man Martin Nevins had explicitly stated in the ‘People of Ireland Against Fuel Prices Protest’ Facebook group that he would be in Dublin to ‘raise hell’ and ‘show that shower in the Dáil’ but failed to attend. An unprecedented instance of shit talking never seen before.

“But that’s like a binding contract, if you click ‘attend’ or comment ‘see you there lads, can’t wait. Them lot won’t know what’s hit them’ you have to attend they’re the rules,” said one irate trucker who did block the East Link bridge. “And Martin was meant to be the chocolate digestives!”

“Oh was that today? I thought you meant Monday next, you know when people do be saying ‘next Monday’ it’s confusing. Do they mean this next Monday or next next Monday? I’ll definitely be at the next one,” confirmed an unconvincing and sheepish Nevins.

Nevins will now be the subject of an internal investigation by the Online Petition Signing Watchdog, where he will also have to answer charges of tweeting ‘great day at protest, politicians are running scared’ despite not attending.

Meanwhile, the hauliers protest dispersed yesterday evening meaning they must have abandoned their plans for weeks long protest and disruption due to the government giving into a number of their demands, which included:

Dropping the price of petrol on the international market which is definitely something the government can do.

Commitment from TG4 to make new episodes of Paisean Faisean.

Forcing the Vatican to release the third secret of Fatima.

Reshooting and rewriting of the final season of Game of Thrones.

Regulations making it illegal to sell 99 ice creams for any more than 99c.