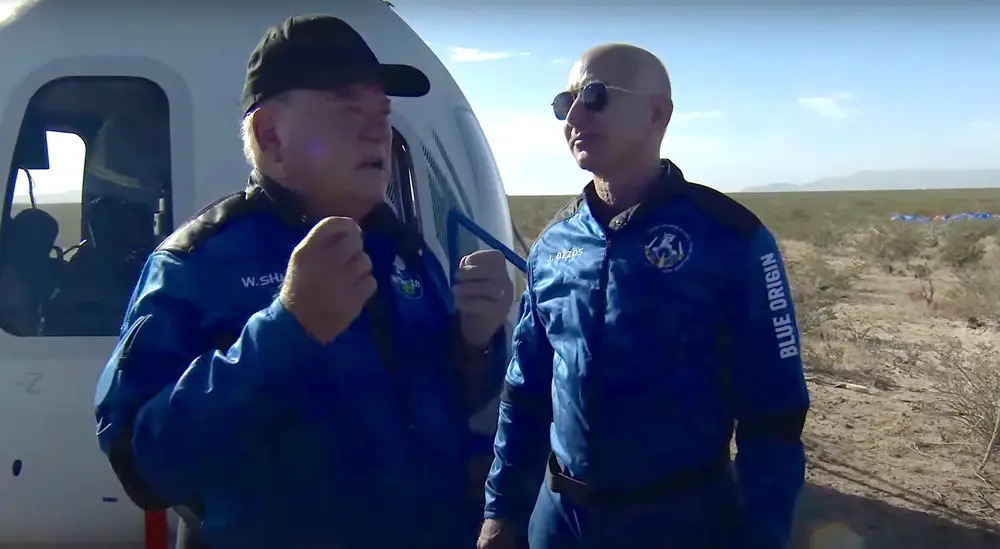 ALTHOUGH the world has admitted that the footage of 90-year-old Star Trek actor William Shatner floating in zero-gravity on board the Blue Origin space flight yesterday was touching, Amazon boss Jeff Bezos ‘needn’t think’ that he’s off the hook for a raft of arsehole behaviour over the last number of years.

Thousands tuned in to see live footage of Shatner becoming the oldest person to ever travel into space, before tuning out after Bezos welcomed the team back to earth after touchdown, largely down to ‘his appearance making us want to punch the wall’, according to a survey.

“He may have sent Captain Kirk to space, but he’s still a total bell-end” stated one ardent Trek fan, whose dislike of Bezos may result in him not buying things from Amazon any more, sometime in the future.

“As far as a billionaire pissing his money away while there are still starving kids in the world, okay, this was pretty cool I suppose. But that’s it, no more fucking around wasting money with this vanity project” added another, noting Bezos’ net worth of over $200bn which could ‘buy a lot of Plumpy Nut’.

“I would make a comment about how the Blue Origin rocket looks like a penis so Bezos must be compensating for something, but they haven’t even tried to hide the fact so what’s the point?” chimed in another, as Bezos continued to praise himself for being the best person he knows.

Meanwhile Shatner himself has stated that the trip was an emotional experience for him, although he had hoped it would have included a bit more sex with green alien babes.