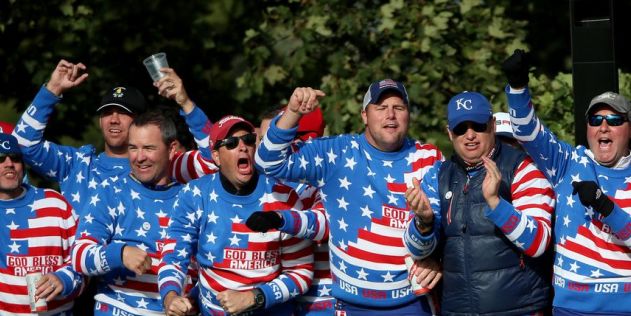 NEW RESEARCH coming into WWN Sport from the Institute of Sports Research has revealed that US golf fans are more irritating than a thousands mosquitos bites doused in vinegar and set on fire.

Citing ample course side evidence from team USA’s dominant and impressive Ryder Cup victory, the ISR confirmed that you’d be forgiven for jamming a knitting needle directly into your ear drums in a bid for escape from the boorish and graceless buffoonery displayed by a crowd seemingly sourced exclusively from the poison ivy league.

“I’d rather attend the world championship of nails on a chalkboard than be subjected to more than five seconds of a repetitive three-letter chant,” confirmed one Ryder Cup viewer who just can’t with these people.

The US supporters’ behaviour is all the more regrettable when compared to their European counterparts who are known for being refined and cultured folk who engage in philosophical debates at tee boxes, pairing such heady conversations with cheese and wine, according to a separate report for the European Golf Institute for Sore Losers.

Elsewhere, Rory McIlroy became just the 4 millionth man to cry over a game of golf in the last week alone.