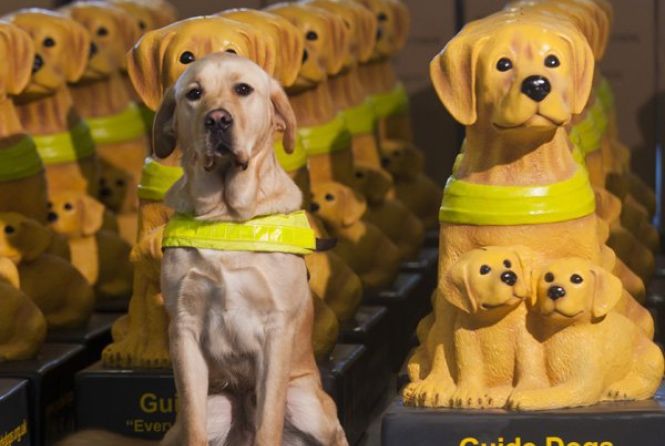 WE’RE all very familiar with charity boxes shaped like dogs, locked in a rictus pant outside a newsagents, acting as a collection point for guide dogs or rescue animals, but did you know that each of those boxes is an actual Labrador carcass? And that each one is made by Waterford taxidermist Cathal McBroder?

“It all started when a man brought in his deceased pet Labrador, to be mounted in a seated position,” said McBroder, speaking to us in his Tramore workshop.

“It was a beloved pet, and the customer wanted it to forever sit inside the door of a small grocery shop, on a little blue platform that the dog had always sat on, greeting customers. So I went ahead with the job, there was nothing unusual about the request. What was unusual however, was how the dog had died. he had been running after a ball and didn’t watch where he was going… sure, the poor thing ran forehead-first into a bar jutting out of a gate, punching a perfectly rectangular hole in the animal’s skull”.

“I told the man it would cost extra to fill the hole in and, miserable hoor that he was, he wouldn’t pay it. So the mounted dog was brought to the shop with a slot in his head and, without being asked, people just started putting coins in him. He raised 478 old pounds in a week”.

The curious incident of the dog full of money caught the attention of a local charity organisation, and before too long McBroder was inundated with requests for more dog-boxes.

“So, we have the wire mount here, and on this we put the ‘cape’ of the animal, then we tuck it all in and spray it with a special lacquer to harden the fur and give it that plastic-ey look,” said the Tramore taxidermist, hard at work on another collection box.

“We do Labradors almost 100% of the time – they’re big, can carry a lot of loose change, plus they’ve got a large rear passage to allow you to easily install a little door for getting the money out. But we’ve also done Dalmatians, Alsatians, Golden Retrievers, dogs with puppies beside them… pretty much any large dog is fine. We also do a few Jack Russell models, although you’ll only ever see them in shops in Cavan”.