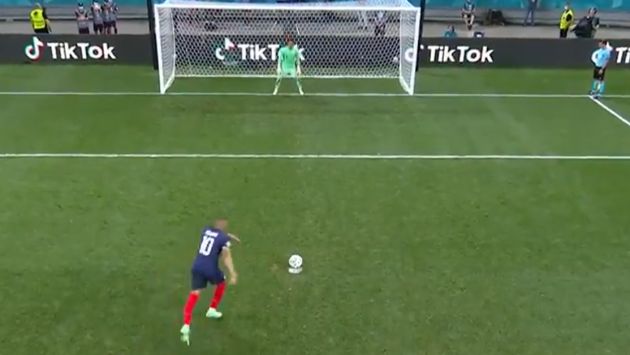 YET ANOTHER day of a disappointing action in a dreary sleep-inducing Euros.

The 8pm kickoff saw France stroll home easy 3-1 winners for everyone that switched over to Love Island around the 70 minute mark.

The only thing worse than Lenglet’s defending for the opening Swiss goal was Xhaka’s haircut. Lenglet will regret filling his boots with quick drying cement which left him unable to jump, a decision which saw him substituted at halftime.

Deschamps’ frustration was clear as he looked more animated than a Looney Tunes cartoon on the sideline but the writers of Euro 2020 had more chaos in store for everyone than a dozen Mad Max sequels could provide.

It was about to go from bad to worse for France but Lloris saved Rodriquez’s penalty after sneaking a tennis racket in his glove to produce a huge save.

A second Benzema goal followed and Pogba’s wonder goal was so beautiful it has won a role as the next Bond girl. With the world champions 3-1 up they decided to stick on some jazz, run a bath, put the champagne on ice and wind down after a victory they hadn’t secured yet.

Neutral to their core the Swiss settled for a draw through the 90 minutes and extra time as France, true to form, surrendered.

Human battering ram Seferovic scored his second of the game before Mario Gavranovic netted an equaliser which ensured Switzerland would be full of newborn Marios 9-months from now as the game became more unpredictable than the Euromillions numbers.

Arsenal fans were so impressed by the incredible performance of Xhaka they have begged Mikel Arteta to sign the player for the club.

Sadly for Lloris his chronic arthritis returned for the penalty shootout as the Swiss players took a ‘Christian missionary in Africa’ approach to spot kicks and converted everything in sight.

Stepping up to take the penalty Mbappe had looked less convincing than 15 euro note. Sommer’s winning save ensures he’ll never have to put his hand in his pocket to buy a Toblerone back home again.

A big plus of a performance, every neutral watching gave credit to the Swiss in what was their greatest performance since Celine Dion won the Eurovision.

Croatia took the lead thanks to Spain’s keeper Simon failing to control a back pass, his touch so poor it was last seen asking passersby for a lend of 2 euro for the bus.

The dejected keeper was left more devastated than a lad who just found out his best friend was taking his ex to the Debs.

The Euros has now seen Own Goal become as prolific as a serial killer in a Netflix documentary.

Echoing the theme of the day a kind, charity focused Spain team gave up their 3-1 lead, with Croatia forcing the game to extra time via goals from two real sons of an Itch in Orsic and Palasic.

At this point the goal scorers became so numerous their names are harder to recall than former X Factors winners, but Morata scored the sort of decisive goal at a crucial moment in the game that it shut his critics up until his next miss, which came about 4 minutes later.

Not everyone was happy with the goalfest as on RTÉ Kenny Cunningham expressed his disgust at the teams conceding 8 goals, which apparently is a horrific sin akin to mass murder.