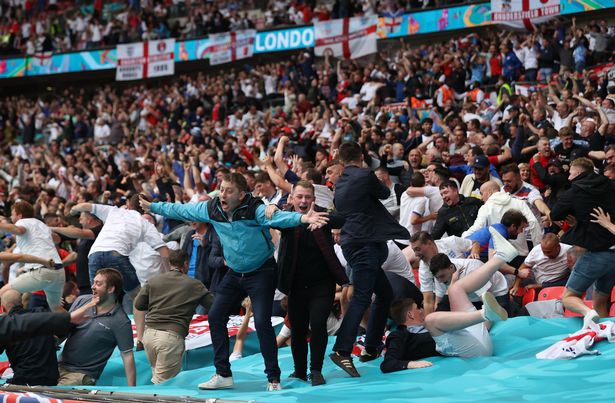 IT WAS a frustrating watch at 5pm as TV directors insisted on showing football during the popular ‘Shots Of David Beckham and Ed Sheeran In The Crowd’ TV show.

All credit to Gareth Southgate, he did it against all odds, he made beating Germany 2-0 look mind numbingly boring.

Possibly the only thing more devoid of joy than Ed Sheeran’s new song, the boring nature of the win won’t matter to supporters but many have admitted they’d find more enjoyment in being subjected to Chinese water torture while being castrated.

Opening the scoring Raheem Sterling jinked forward to start the move which led to his goal, in the sort of amazing individual display that will be immediately forgotten by fans if he so much as fucking thinks about missing a chance in the next game.

Our thoughts are with the Daily Mail comments section who don’t actually want to win the Euros if it means they’ll have to stop being racist towards Sterling.

Harry Kane finally scored and in the process still proved his doubters largely right in fairness, because his performance had again been as impressive as a toddler’s self portrait.

Kane is once again the greatest striker to ever play the game despite being as sluggish as a sloth shot with a tranquiliser dart.

In his final game as Germany manager Joachim Low went out on the big stage doing what he loves; being pictured picking his nose and eating his snot and also putting his hands down his pants for a sniff of his undercarriage.

Humiliated by a defeat at the hands of an English team, Germany have nothing but their 3 Euros titles and 4 World Cups.

England’s win sets up a tantilising ‘Iceland 2: Ukraine Boogaloo’ in the quarter finals.

In the other game Sweden and Ukraine faced off in the ‘not sure I’m arsed watching this’ derby. This game going to extra time was as predictable as the twist in the Sixth Sense on the 7th time of watching.

Zinchenko opened the scoring but Ukraine were pegged back by Forsberg. Sweden went on to hit the woodwork more times than a carpenter, but couldn’t find a winner.

After a VAR check Sweden’s Danielson was shown a red for a challenge which should get him a 6-fight deal with the UFC.

With Sweden down to 10-men, there was every chance Ukraine, a rusted out 3-wheeled 1989 Ford Fiesta of a team, could actually make the quarter finals.

Dovbyk header’s in the 121st minute produced the sort of heartbreak for the Swedes that is only eclipsed by the sadness felt by a hungover Irish man dropping his breakfast roll and Lucozade in some dog shit. Yes, they will get over it, but it will take years.