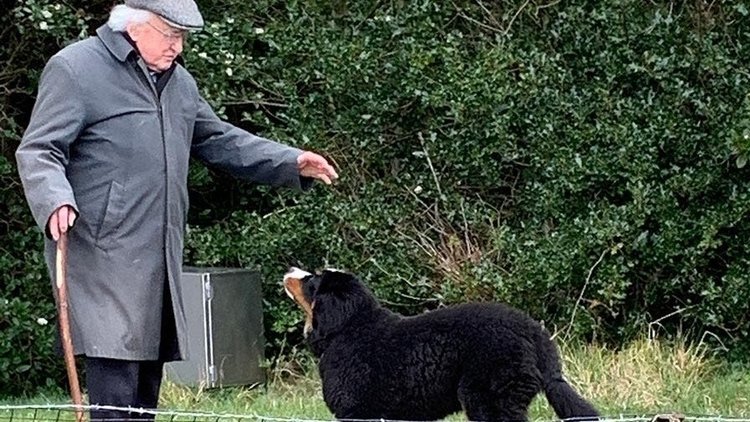 ALTHOUGH not much is known about Misneach, the latest Bernese Mountain Dog assigned to the role of Madra Na Uachtaráin, WWN can outline the rigorous process that the 5-month-old pup had to go through in order to claim the coveted role of Michael D. Higgins’ new companion following the passing of grizzled veteran Síoda.

Any dog that serves Higgins must also double as a getaway vehicle should ‘the shit go down’, and Misneach is no different. Although the pup has yet to reach full size, he had to demonstrate his ability to drag the president away from harm such as assassinations or fire (it is believed a dummy president was used in these tests, although this has not been confirmed). “If he can do it as a pup, he’ll certainly be able to do it as a grown dog”, Higgins explained.

In order to serve as First Dog, Misneach had to prove that he had the endurance to hang with Michael D’s strenuous presidential workload. The pup was taken through long days of lying around getting belly rubs from foreign dignitaries to show that he wouldn’t suddenly snap from boredom and take the arm off Kamala Harris, before being put through his paces in a series of walks around the grounds of Áras an Uachtaráin to show that he had what it takes when it comes to walking around the grounds of Áras an Uachtaráin.

Having been fooled several times during his presidency, Higgins had to be certain that Misneach was in fact a dog, and not a really big cat. A simple medical examination sorted this out. “We have enough fucking cats around here” stated the president, eyeing up a tabby that he absolutely hates.

Just like Bród and Sióda, Misneach (born Mr. Floofy Butt) had to change his name to something that was at once hard to pronounce, to ensure an air of mystery and bafflement among visiting dignitaries. “I like to keep them on the back foot, and watching them struggle with something so simple and a dog’s name is great for that” laughed Higgins, before admitting that even he isn’t sure how ‘Misneach’ is pronounced. “I just call him Missy”, he laughed.