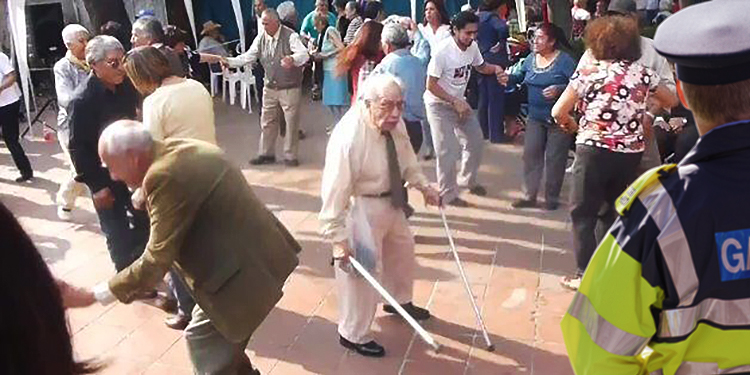 UNEDIFYING scenes were captured by news cameras last night as gardaí broke up a large gathering of newly vaccinated over 85s in the Limerick City area of the country.

“I’ve been cooped up long enough ya gowls, you can can cocoon this,” one pensioner was heard to say moments before headbutting a garda before fleeing the scene.

The street party, which was attended by anywhere between 100 and 140,000 people depending on what tabloid is trying to get you rage-click their headline, has been heavily criticised by people who say it sends the wrong message to younger people not yet vaccinated.

“You’ll have 70-80 year olds now influenced by this behaviour, mark my words we’ll be breaking up some septuagenarian sex parties before the week is out,” confirmed a garda spokesperson.

Among items confiscated at the party included bags of MDMA tablets, 600 bottles of Buckfast, several sets of decks and a lighting rig which was used by octogenarian DJs supplying tunes to the party as well as other party paraphernalia including gimp masks, fireworks, neon face paint and half eaten kebabs.

The government has formally thanked all those holding parties and large gatherings, confirming they will use these events as an incomprehensible excuse for a slower than expected rollout of vaccines if and when that occurs.

Elsewhere, a spokesperson for the University of Limerick has apologised for holding a practical in-person, on-street exam for students of its Events Management course which also resulted in a street party in the city.