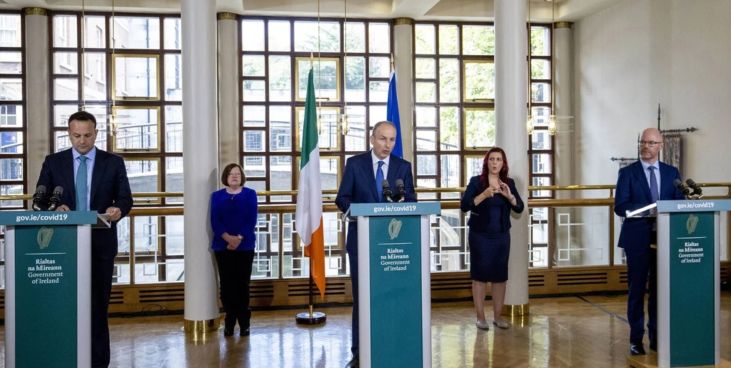 AS EXPERTS warn that trying to follow politician-led Covid-19 briefings could result in you suffering a fatal brain aneurysm, the government insisted if you think you’re confused now wait until you hear them try and clear things up some more.

Formally entering stage ‘making about as much sense as a drunk uncle at a wedding’ and resembling the three horseman of the you won’t understand any of this, Leo Varadkar, Micheál Martin and Stephen Donnelly took to another briefing pleading for just 10 or 12 more incoherent goes at explaining its new ‘5 Stages’ strategy.

“Milk, eggs, bread, no wait that’s my shopping list,” confirmed Minister Donnelly, recipient of the world’s quickest Covid-19 test results, a service which will presumably be extended to the rest of the public immediately.

“I’m going to level with you,” added Donnelly before delivering news of guidelines in the form of an interpretive dance.

Donnelly later admitted he didn’t realise trying to pull a sickie off work would cause such a fuss, but nevertheless encouraged the nation to try it as they look like they could do with the time off from this madness.

“Did you know as minister for health I brought in the smoking ban in pubs,” added Taoiseach Micheál Martin for some reason.

This latest press conference exercise in raising the nation’s blood pressure had to be abandoned after Martin and Varadkar reported feeling sick to stomach at the thought of how much Sinn Féin is probably enjoying this.