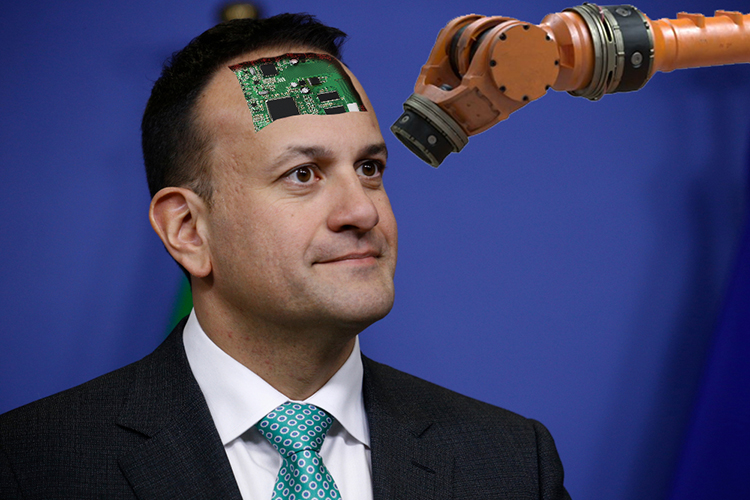 SOFTWARE ENGINEERS have apologised for a glitch in the Taoiseach’s operating system which had seen him mistakenly parrot ‘we’re all in this together’ in the face of the ongoing hardship caused by the Covid-19 payment.

“That explains all the violent twitching and spasming he was doing any time he first announced the increased payments, it was like he was fighting against the malfunction which made him appear nicer, more humane” explained one software engineer as he jammed a screwdriver into the open unit on the back of the Taoiseach’s head.

“His optic scanner function was in a right state as well, it mistakenly registered a poor person as a ‘real human’. But no more of that now, we’ve restored him to his original default factory settings,” added the engineer.

Ireland got its first glimpse of the factory reset Taoiseach speaking on Newstalk yesterday when he said it’s “not fair” and “not sustainable” that nearly 40% of people on Covid payments are better off than they were when they were working.

Dusting off his old ‘welfare cheats cheat us all’ sign and robotically playing it like a mock guitar, the Taoiseach said “we’ve been running the economy for nearly 10 years and it turns out a lot of you are really poor, like imagine €350 a week being better than what you earn normally? Or worse, imagine thinking you’re worth more than that?”

“But, there’s no such thing as free money,” he added, “well technically I’m still being paid a €207k-a-year salary for a job I lost three months ago so maybe there is, for me. However, you lot should start getting up a bit earlier and find a second job for yourselves now that everything is totally back to normal”.