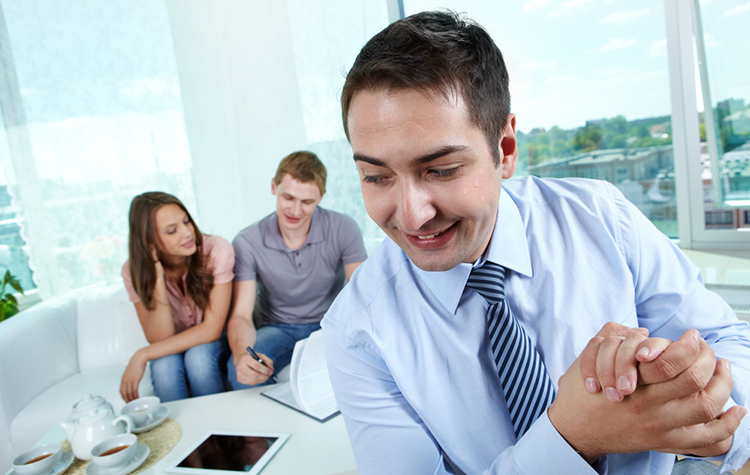 SORELY missing the once regular easy flow of commission on all house sales, one local estate agent clearly climbing the walls in utter panic, has repeatedly stated that contrary to all available information and common sense, now is actually the perfect time to buy a house.

“Confidence may be down, but we’re going to see a huge surge in demand in Q4…” explained estate agent extraordinaire, Peter Coyle, repeating a pattern of one-sided conversation that has played itself out over much of the last month as his latest prospective buyers mulled over some paperwork.

Ignoring a wave of economic predictions detailing a sharp decline in house prices over the coming months, the son of two continued his tirade of factual manipulation in the hopes his end of quarter targets warrant his employer keeping him on board.

“This property is highly sought after and I’m literally meeting another couple now in ten minutes who are very interested,” the now desperate Coyle casually dropped into conversation after hearing a negative sounding mumble from the pair, before again lying through his teeth. “I’d say this place will be worth a fortune in another few years. God, I wish I could buy it myself ha-ha, you’re so lucky”.

Now clinging to their legs in a pathetic display, the estate agent begged his latest failed sale to reevaluate their decision.

“I’ll pay the maintenance fees out of my own pocket,” he yelled as the male half of the couple kicked him off, before shooing him away and threatening to call police, “look, everything is going to work out just fine, just sign on the dotted line you lousy bastards”.