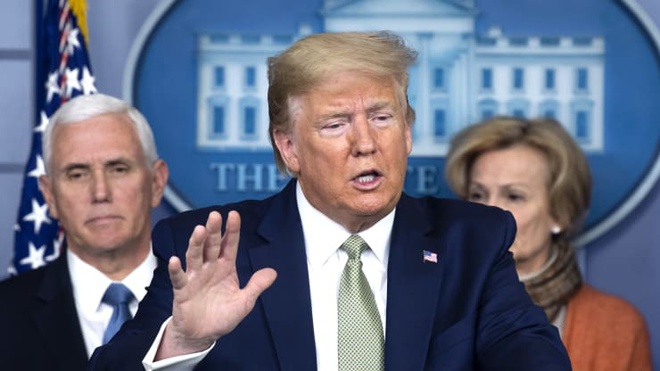 THANKS to president Donald Trump America has moved from a status ‘this is a non-existent problem made up by the evil leftie socialists to scare the stock market’ two weeks ago to ‘here’s how to decide which child to eat first when you run out of food’ today.

Any world leader looking to replicate the complete lack of success exuded by President Trump need look no further than the guide below, which has been cobbled together thanks to input from the man himself.

Here’s how to handle a pandemic Donald Trump style:

Appoint Typhoid Mary as head of the CDC.

Drop everything you’re doing to rush to the bedside of the stock market and hold a vigil.

Say something reassuring like “I don’t need to listen to experts, I’ve watched maybe 10, 20 second of the trailer to ‘Contagion’ on Youtube. I know everything now.”

At all times look like a deer caught in the headlights who has just repeatedly soiled itself.

Magically expand the amount of testing you are doing simply by putting a ‘USA’ baseball cap on your head. Do nothing else. Job done. Mission accomplished.

Don’t just ‘handle’ a pandemic, grope it, hug it, kiss it, take a bath in it. Don’t wash for days.

Hold a national day of prayer in response to people screaming “we need some actual fucking help you moron”.

Abolish and defund the physical copies of evidence which states you personally defunded and abolished a pandemic taskforce.

Tell America Covid-19 will be gone by sundown after you personally instructed law enforcement to treat the disease like it was an unarmed African American teenager.

Saying something else reassuring like “don’t worry, I’ll be okay. The rest of you, oh boy, you’re fucked. You will not die in vein though, I still expect to be elected again. Yay me.”

Continue to portray an image of complete control by telling members of the public requiring advice and guidance to listen to The Who’s back catalogue on Spotify.

Lead by example when it comes to social distancing; to do this make sure you appear on screen during live TV addresses with administration staff and experts and recreate what would happen if colony of ants tried to mount a discarded apple core at the same time.

Say another reassuring thing like “I’m not responsible for any of this, because to be responsible you have to have at least four brain cells and jokes on you America, because I lose count after two”.