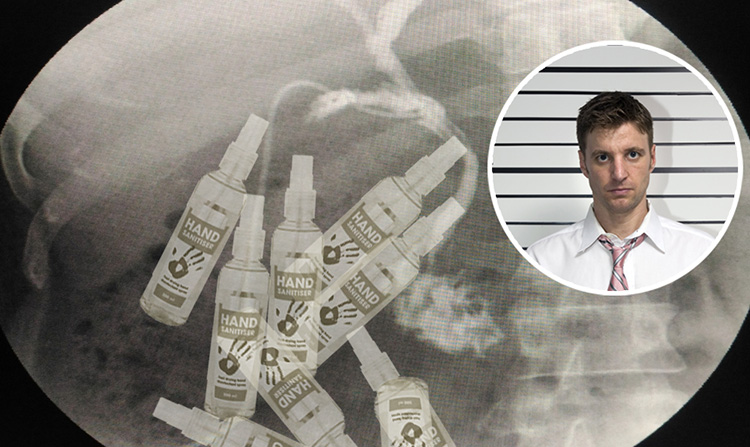 THE MAN has claimed he was forced into ingesting pellets carrying the valuable black market product by drug gangs who have abandoned selling illicit narcotics in favour of trading in the more lucrative items of Covid-19 related panic buys.

An Irish hand sanitiser mule returning direct from Brazil is believed to have ingested 400 pocket-sized bottles on site at a manufacturing plant early yesterday, and by doing so his gang bosses had hoped to avoid excise duty and VAT while marking up the price of the goods by 500%.

“You can kiss goodbye to doing lines of cocaine in toilets, it’s all about begging someone for a hit of hand sanitser these days,” explained one health official who confirmed the alcohol based hand-washing solution is now more valuable than gold, platinum and even printer ink and cinema popcorn.

“Shops and pharmacies are out of these goods and gangs have spotted a gap in the germaphobe market. Last week people would have laughed at the thought of paying €1,000 for 50ml bottle but that’s supply and demand for you,” explained one member of an armed garda unit that tackled mule Liam Castigan (22) to the ground in Dublin airport.

Gardaí have since strongly denied any knowledge of the whereabouts of 30 bottles of the confiscated sanitiser that have went missing following the bust.

People on the street have also been warned of the dangers of buying underground hand sanitiser from rogue dealers as many bottles tested contain just soap and water.

“Fleecing the public with overpriced products is kind of our job,” one pharmacist warned.