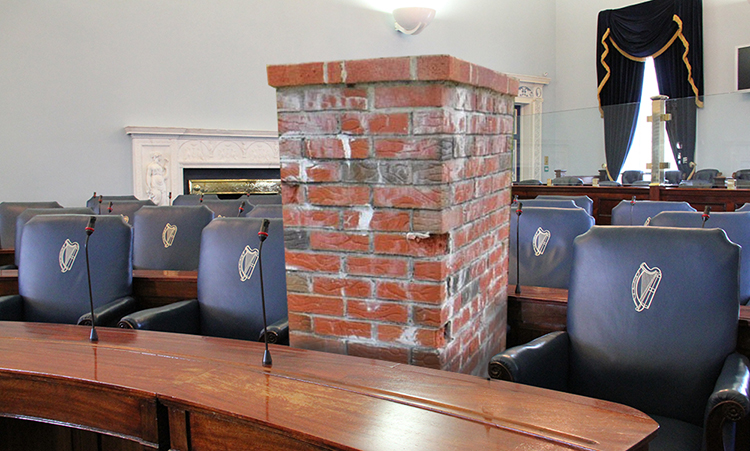 A NEW report issued by the Seanad has called for a designated place to be reserved for members of the travelling community, suggesting that a nice secure wall be built around it for the group’s ‘own protection’, and more importantly, to ‘make them feel more at home’.

“We should probably restrict access to the Seanad bar too, you know, because they can’t take a drink,” put one worried senator, pointing his car key out the window to double check he locked it, “we can just tell them that the bar is closing for refurbishments or something – basically use whatever pathetic excuse Irish publicans make everytime they see them coming”.

Fearing a total takeover of the upper house of the Oireachtas, security at the Senate suggested putting ‘caravan proof barriers’ at the entrance, “just in case”, while showcasing ‘no horse’ signs for the car park.

“Once you let one in, they’ll all arrive on and take over the place,” said one irrational staff member, whose mother once told him she’d sell him to the tinkers when he was bold, “where do we keep the copper cylinders in here, lads, lead pipes?”.

The move, which will see members of the travelling community speak in the Seanad, will be a first for Ireland’s forgotten race since been recognised as an ethnic minority only two years ago.

“We’re so progressive now,” said another anonymous senator, proud of his newly found diverse thinking, “and yes, we basically treated these people like animals for hundreds of years and continue to do so by keeping them in apartheid style camps and prehistoric conditions, but sure, aren’t we great now we’re leaving them speak in our big fancy house all by themselves?”

“But yeah, that wall should have some razor wire on it and it could be a little bit higher,” he concluded.